Short season for us

But first:  My daughter, Amanda and husband, Steven Rainey have created a son, their first!  Only seen via Skype so far! 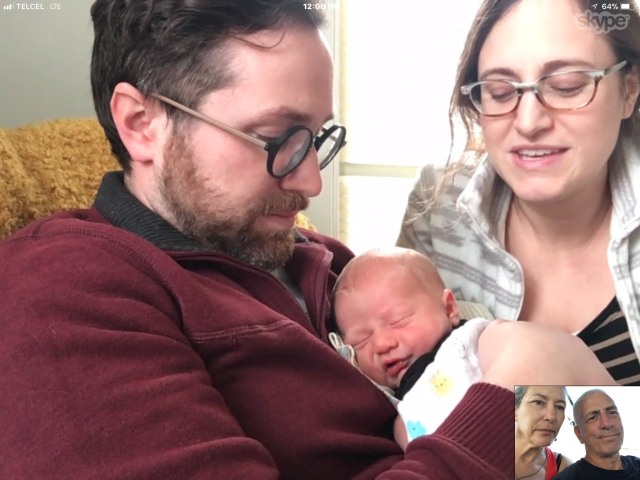 Back to Boat:  It has been a short boat season for us this year, 2018.  Jess says that maybe we will come pet the boat in July or August and try for the Sea then.  We shall see!

Last post got us to early February.  Since then we returned to Banderas Bay from locations south or there.  Jess did some dental work at a local dentist in Bucerias Nayarti MX.  Where a crown runs around $2000 peso or $108 USD.  WooHoo!  Jim got a case of dengue fever and was down and out a couple weeks.  We stayed at dock in Marina Riveria Nayarit for the dental and fever stuff.

Friends Jeanine and John from SF area came to stay a week in Yelapa, Jalisco MX on the south shore of  Banderas Bay and we got to play with them a hand full of days.  Way fun!

Season ended with a very quiet motor up to Mazatlan, a record breaking short time for boat closing and a couple nights hotel stay to see how the other half do it.  Then a CHEAP flight back to Denver via Phoenix from Mazatlan on American Airlines.

AIRLINE RANT:  The airline people who are making the rules that the people actually doing the work have to run with are the ASSHOLES.  The people we interacted with during our flights were first rate!  Have to say, we did a 5 wee trip on maybe 6 different European airlines last June/July and seating and baggage rules were ALWAYS excellent, not to mention the drinks and snacks which put US based airlines to shame!

Last projects; we find that the port lights remain sound if we keep the rubber seals clean and closed tightly!  Have put replacement seals and a screen and maybe a lens or two on the parts list for next season.   We are finally getting the wood toe rail and misc. teak parts on the boat clean of the varnish and ceatol which we have used in the past.  I think we will just plan to keep them washed when needed.

We found the sealant failed under the salon hatch.  The rope seal we replaced this year did not do the trick so we pulled the hatch up and sealed it with butyl tape.  Worked great! 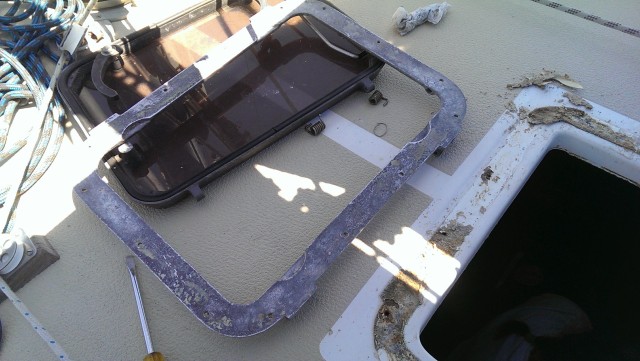 I am going to blame the leak, 40 years after the boat was constructed, on the method used to install the hatch.  The hatch is screwed down with a coarse wood screw into the fiberglass coach roof surface.  The installer drilled a pilot hole for the screws but failed to make the countersink at the hole surface so ALL the screw holes had spalled around tthe screw hole.  This condition made it difficult to tighten and seal the hatch base properly.  A blow up photo at a spall. 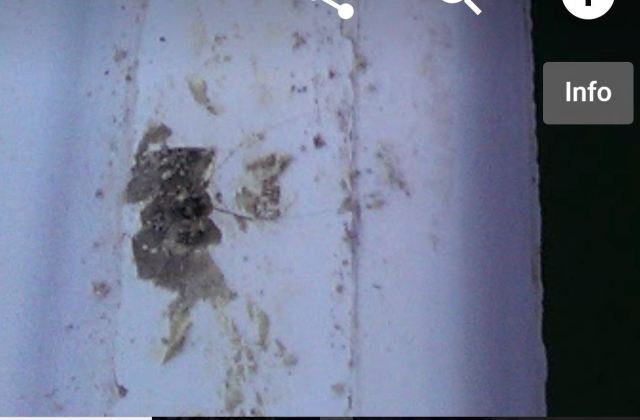 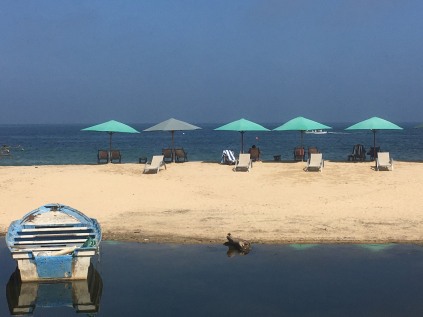 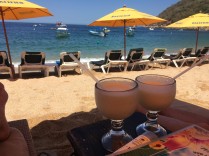 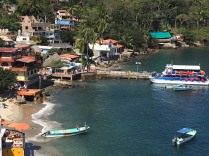 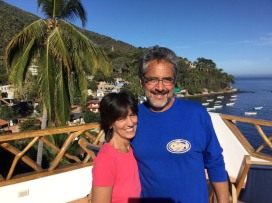 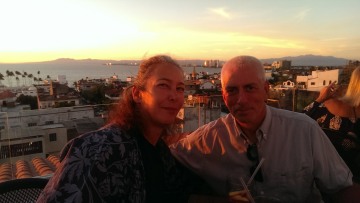 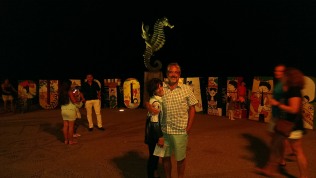 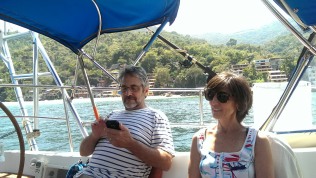 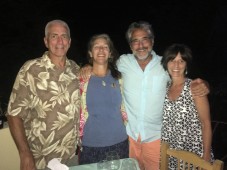 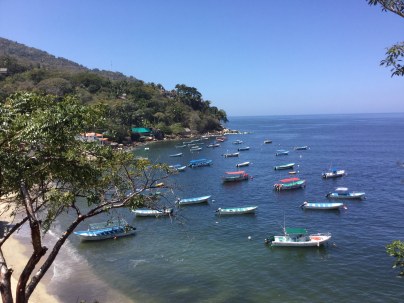 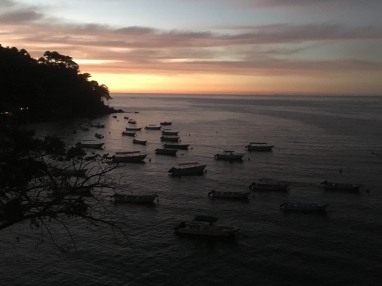 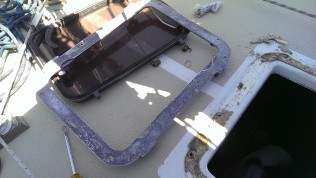 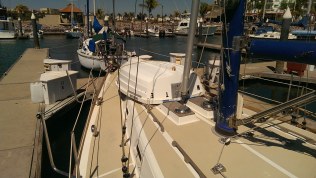 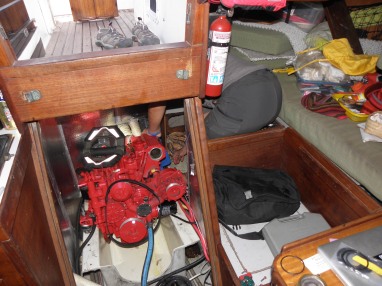 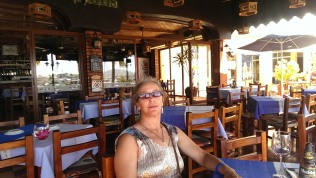 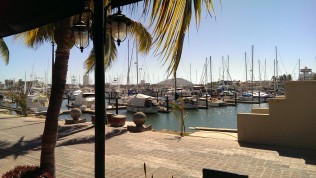 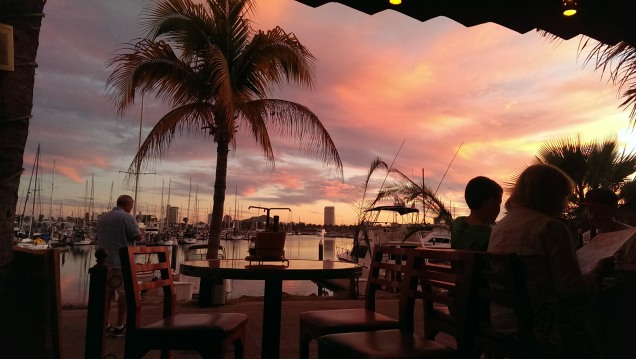 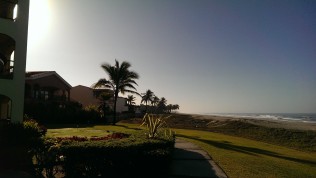 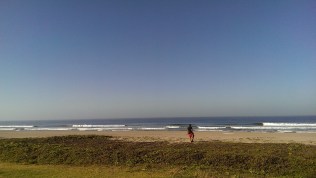 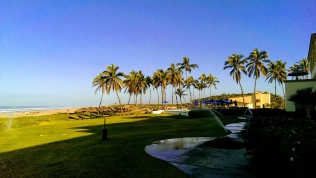 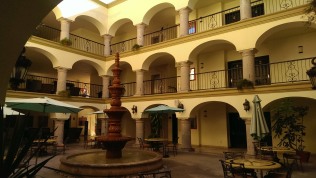