We been in Mexico since the 5th Dec 2018.  We flew American Air to Mazatlan via Phoenix this year and flight was delayed three plus hours.  So it was nice that we had rented an Airbnb at the marina for couple if nights in order to allow opening the boat. Hajime is in lower left hand corner of photo, on dock 7, and Airbnb was on ground floor of red roofed complex near walk to pool…  Logistics were GREAT!

Items we brought down to feed boat’s appetite.

WOW, we put the batteries away in March 2018 with no charger and no usage connections (except for a switched voltage meter which was off except when taking the readings).  Here is the chart of readings taken by our boat management people over an eight and one half month period of time.  The batteries self discharged about 0.08 volts or 0.6% over 8.5 months.  I was delighted.  We are starting the third season with these batteries and they still seem to be treating us like new batteries.
Yes, we will do another discharge cycle chart when we get to dock for a several days to check against our prior discharge data to see if we think we see any degradation in the batteries so far.
Since being back on boat we tend to use about 20 to 25 Amp Hours over the nights      (a change in refrigerator control is using less power now).  When we are off the boat the solar panels are recharging the batteries completely every day.  Even now during the shortest daylight time of the year.  When we are on boat all day, computers, lights, pumps, etc. we tend to induce around a net 30 to 40 Amp Hour deficit daily.  Shore power charger or running the engine (alternator) keeps up charged but we can last 5 or six ‘on boat” days without recharging, way nice!

So about the refrigerator:

It turns out that lightning hit the dock Hajime was on this summer and caused some havoc with some of the other boats.
The only thing we found on opening the boat was that the refrigerator would not start when powered.  The original refrigeration system we installed in 2010 was the Isotherm 4701.   We put it into the original built in Ice Box on s/v Hajime.  The compressor was installed aft in the lazarette and the cold plate inside the ice box.

Last year we replaced the cold plate with a Nova Kool RT4 Boxed Evaporator with 12 Foot Line set.  We were trying to make it so we could make ice for the margaritas!!!

It worked out last year and we did not change the old isotherm controller.  This year the refrigerator would not power up.  We got out the volt/ohm meter and chased it down to the isotherm control module was not exciting the compressor to operate.
Last year, just in case, we picked up a Yeeco mechanical cooling thermostat and decided not ti use it. This year we found it in the spares kit, whew!

What isotherm does is take a standard 12/24 volt DC compressor.  Ours is a Danfoss BD50F.  And they put their control module ( the blue one in our case) between the Danfoss control connectors and power hookups.  Then they run a thermistor resistor into the ice box and a control panel to mount for the refrigerator temperature control.
The  POS cooling water pump and pump control module, which were the isotherm raw water cooling system, we replaced in 2013 after our pump/control module failed.  We replaced the high cost isotherm parts with a horn relay and a 12v solar water pump.

So we pulled the blue isotherm module off the Danfoss and
ran boat 12v power to +/- terminals
and ran the cooling water pump relay +/- to the Fan/- terminals
and ran the Yeeco cooling thermostat leads to the C/T connectors without a resistor
and she runs nice and quiet at 2000 rpm…  And the compressor/pump system looks to draw around 3.5 to 4 Amps.

It did take a bit of time to do the research…

Finally did the repair kit on the Air Breeze  200 Watt windmill.  We bought the repair part electronic control board a couple years ago and finally got a control board that goes inside the machine up on the post. And did the replacement.  We let it run in 60 knot winds back in 2011 and it has not been right since!
https://www.emarineinc.com/categories/Air-Breeze-Marine-Parts 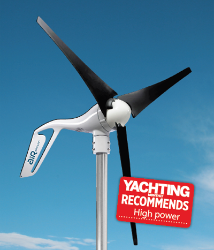 After replacement of the circuit board, the wind machine is working pretty well again.  It likes to shutdown with a “too high wind”  alarm at around 25 knots wind speed and restart after 30 sec.  Book says design is for 35 knor wind speed for this function, but other than that it seems to be working well.  We are getting 3 to 4 Amps in 15 knot winds.

Also we seem to have a water pump problem.  Seems that the raw water pump on the Beta 30 is dripping salt water (occasionally).  Last year it started and I emailed for parts availability to betamarinenc.com in the USA and they were VERY HELPFUL.  I on the other hand forgot to order the parts when we got back to the USA last season.  My bad!  We ordered a rebuild kit and a replacement pump and hope friends can bring them down next month.  Probably a good idea to have spare raw water pump onboard.
It turns out that the original pump design had issued with the raw water seal and they have devised a spacer and “O”-ring modification to help fix it.  We probably have the original pump with the design issue.  Pump was made by ancor.it and both pump and re-build parts are available in USA from Beta Distributors.
https://www.ancor.it/en/pompe-raffreddamento-motore/pompe-raffreddamento-motori/engine-cooling-pump-st-129-cod-3492.html

Part# 15 and #16 are the added parts in the above revised assy.parts list…

The procedure for the re-build is as follows:

1. Remove the pump from the engine.
2. Remove cover screws (18), Cover (2) and Cover Seal.
3. Remove Impeller (11) with suitable removal tool, and remove the Wear Plate (14).
4. Remove the Retaining Tube (15) and the Retaining Tube Centring Ring (16)
5. Remove the Oil Seal (17) with a hooked pick or similar suitable tool.
6. Remove Circlip (12) with Circlip Pliers.
7. Push Shaft and Bearing assembly out of the pump body by pressing the shaft out from the impeller end.
8. Remove the Water Seal (7) and V‐ring Seal (13) using a suitable tool.
9. To remove the bearings from the shaft a bearing press plate should be used to offset the bearing spacer to one side and sit behind the engine side bearing.
10.The engine side bearing (3) can then be pressed from the shaft.
11.Remove the bearing spacer (6).
12.The seal side bearing (3) can then be pressed from the shaft.
13.Remove Circlip (10) from shaft is required.

Parts Inspection
All parts should be inspected for wear / damage before reassembly / re‐use.
It is good practice to replace all Seals with new parts during re‐assembled.
If the water seal (7) has worn a groove in the shaft (4) then the shaft should be
replaced.
If the pump has leaked and the bearings are contaminated with water they should
be replaced.

Assembly / Re‐assembly Procedure
1. Ensure that Circlip (10) is fitted to the groove in the Shaft (4).
2. Press the “seal side” Bearing (3) onto the Shaft (4) until the inner ring rests against the Circlip (10). Ensure the inner bearing ring is supported by the press tool to prevent damage to the bearing.
3. Fit the Bearing Spacer (6) between the two bearings and press the engine side bearing (3) onto the shaft until both bearing outer rings are in contact with the bearing spacer. Ensure that both bearing press tools support both the inner and outer bearing rings of each bearing to prevent damage to the bearing.
4. Press the bearing / shaft assembly into the pump body (1), ensure the press tool pushes on the outer bearing ring to prevent damage to the bearings.
5. Fit the Circlip (12) with circlip pliers.
6. Fit the new Oil Seal (17) by pressing into place against outer diameter, lubrication may be required to fit correctly / easily. Once the seal is fitted, use a plastic pick or thin tool to displace the oil seal lip and release any air trapped behind the Oil Seal (17).
7. Push the new V‐Ring seal (13) down the shaft until is seats on the counter face inside the pump body, it should be deflected slightly by the counter face to seal the bearing housing.
8. Press the new Water Seal (7) into the water seal seat ensuring the seal lip is pointing towards the impeller end of the pump. To seat the water seal correctly the seat and seal should be lubricated with a small amount of water or rubbing alcohol.
9. Fit the Centring Ring (16) to the outer diameter of the Retaining Tube (15) and push into place behind the seal (7). Ensure the Centring Ring (16) is still in place on the tube once fitted.
10.Fit the Wear Plate (14) inside the impeller housing.
11.Lubricate the impeller bore and wear plate with l a neoprene rubber compatible lubricant (silicone lubricant or Glycerol are acceptable).
12.Fit the impeller (11) all the way into the housing, ensure it engages with the shaft and that the drive pin is fitted.
13.Fit the Cover Seal (5), then lubricate the impeller and seal with neoprene and nitrile rubber compatible lubricant (as above).
14.Fit the Cover Plate (2) and fix in place with 6 Cover Screws (18).
15.Re‐install the pump onto the engine.

We are going to re-cover the foam settee cushions and bunk cushions, again.  We did them in 2011, all but the V-berth cushions, and they have collected quite a bit of grime from the 4 years of full time live aboard et al.   We bought the fabric for around $50 today and we can reclaim the old zippers.  It should only take a couple/three days to do the work (once we start).  We will photo…   Here are the old cushions from 2011…

We also picked up a mattress topper, 2 inch gel foam memory foam, from amazon.com.mx and had it sent to the Marina Mazatlan.  We cut a king size (74″ x 74″) down for the V-Berth where we sleep and are feeling the love…  It has improved the comfort of the 4 inch thick, 40 year old, foam cushions tremendously!  And it was only around $60 USD delivered… Woohoo.

Just got a new Trident Marine 1300-7760 L.P. Gas Control and Detection System, 12V , Solenoid control.  The old xintex S-2 was screaming all the time and we decommissioned it a couple years ago.  It felt right to replace it!  Looks nice installed… 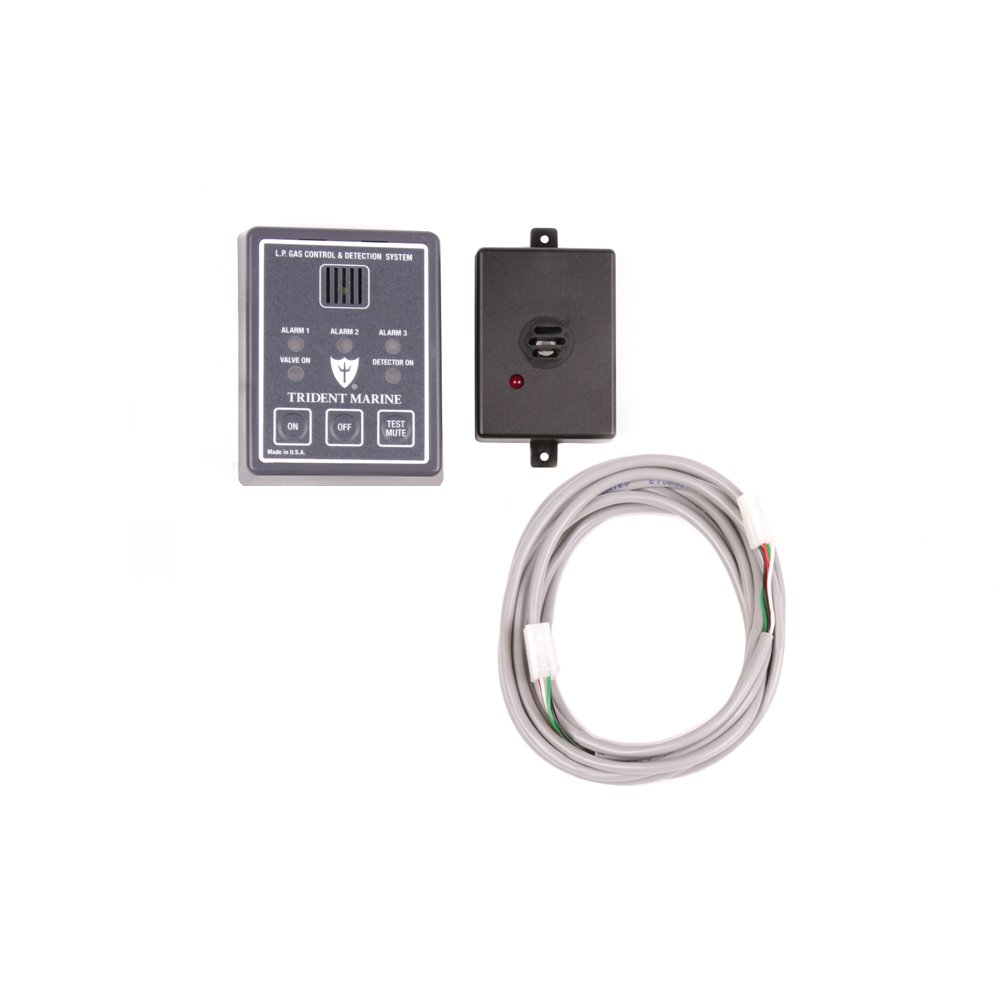 Jim got his residente permanente, “GREEN CARD” , on the 10th, last week, and Jess started her paperwork with immigration on the 10th.  Permanent residency for us is the suggested method for folks returning to Mexico often.  The six month “tourist visa” you get with a plane ticket to MX is not meant for folks who stay longer than six months at times.

We finally got to Irimi Dojo, Federico and Aida’s dojo in Colonia Juarez here in Mazatlan this last week.  It is great to see everyone and play a little judo.  I sat out the first night, Wednesday,  with a little stiffness still from the header I took at the masters in Cancun, but couldn’t stay away and dressed on Friday.  Saturday we took a bus to Culiacán for the state qualifier for the cadet  national judo tournament in Feb.  Both of the Torres boys qualified for the National tournament.